A cake is made by putting together many different layers.

A cake doesn’t need to have all of the layers to be considered a cake.

The cake base, syrup, and garnish are all optional components for a cake.

A cake needs at minimum the cake, filling, and coating.

Not all cakes have a cake base, but cakes with multiple layers do have cake bases.

Cake bases are sturdy and crispy to hold all of the layers on top of it.

It also makes the cake easier to cut having a stable base to cut through.

The cake itself is the spongy part of the cake.

The cake is made by mixing dry and liquid ingredients, and folding them together gently.

Cake layers should not be overmixed.

They should be only mixed until just combined so it can have those puffy air pockets which creates a light, bouncy cake layer.

Syrup is infused into the spongy cake, and therefore absorbs the flavor.

The alchohol is absorbed by the cake, without having to put the flavoring directly into the cake layers.

The filling of the cake adds more flavoring to the cake in between the layers.

A filling can be made of anything from custard to jam to place in between your cake layers.

The coating of the cake is the outer layer of what encases the cake.

The coating will fully cover the cake in a layer of sweetness.

Decorations for cakes can be made out of many different foods, like buttercream.

As an Amazon Affiliate, I earn from qualifying purchases.

Praline feuilletine is a crunchy cake base used in fancy dessert recipes.

Feuilletines are crispy wafers that give the cake base it’s crunchy texture.

Feuilletines are made by mixing together equal parts egg whites, flour, icing sugar, and butter and baking it in the oven until it’s golden brown.

The feuilletine is then broken up into small pieces that will be mixed into the cake base.

Praline paste is made by creating a caramel sauce, and then adding in roasted hazelnuts at the end of the caramel making process.

The caramel and hazelnuts are blended together until it creates a paste. The praline flavor gives the cake base a nutty and caramel flavor.

Melted chocolate brings this cake base together. You can use white chocolate, dark chocolate, or a combination if you like. 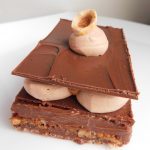 As an Amazon Affiliate, I earn from qualifying purchases.

Cake icings can be made out of buttercream, cream cheese, and whipped cream for a rich, creamy, frosting.

Buttercream frosting or cream cheese icing are the perfect base to add a variety of flavors to create your own rich icing for cakes.

Whipped cream based frosting is has more liquid, and isn’t as thick, therefore it’s easily spreadable for your cake.

Try using one of these sweet cake icing flavors for your next cake!

Cream cheese frosting is a tangy, creamy frosting for cakes.

It’s not as sweet as buttercream, and has the memorable cream cheese and vanilla flavor.

Cream cheese frosting needs to have the right consistency to be piped into shapes using a piping tip.

Vanilla buttercream frosting is rich and creamy, with an aromatic flavor of vanilla.

It’s a stiff icing, therefore its works well for intricate piping like creating roses or petals.

Vanilla buttercream is made with heavy cream instead of milk to thin it out, therefore it has more of a buttery, velvety flavor.

Strawberry frosting is one of the most fruity frostings you’ll ever eat!!

The puree is added to a buttercream base, and it produces a vibrant pink frosting.

Strawberry buttercream has a bit of unique look to it, it has tiny pieces of strawberry mixed throughout the icing.

I recommend using the buttercream within 1-2 days, as the flavor fades over time.

Strawberry frosting can be used for making strawberry shortcake, or on top of vanilla cake.

Orange whipped cream is made by whipping heavy cream until stiff peaks.

Orange zest and a little powdered sugar make this cake icing refreshing with citrus and have a sweet flavor.

White chocolate is a fairly sweet chocolate, but added to buttercream makes it a delicious and creamy frosting that isn’t too sweet.

White chocolate buttercream is a beautiful crisp white frosting, but you can color if desired using gel food coloring.

Coffee icing is an incredible flavored icing because it’s FULL of coffee flavor.

Coffee buttercream frosting has a hazel color to the frosting.

Champagne buttercream frosting has a lovely hint of bubbly flavor.

Chai spiced frosting has the flavor of a chai latte.

Chai spiced frosting is made by infusing chai spice into a vanilla buttercream frosting.

Chai spiced frosting has a birch color to it.

Crushed cookies and cookie crumbs are added to the frosting to create this decadent and rich buttercream icing.

Cookies and cream buttercream frosting can be used for chocolate cake or vanilla cake.

Chocolate buttercream frosting is made by adding a little vanilla extract, and cocoa powder to a buttercream base frosting.

Chocolate buttercream is a heavy frosting.

Chocolate buttercream can be used for frosting chocolate cake.

Hazelnut icing is a nutty and chocolatey frosting.

Hazelnut buttercream icing is made by adding cocoa powder, and hazelnut sauce to a buttercream frosting.

Hazelnut frosting is a unique frosting in that it has a nut flavored undertone with chocolate flavor.

Peanut butter frosting is a fluffy and light buttercream.

It’s a bit unique, in that the frosting is thinned out by adding freshly whipped whipping cream.

The whipping cream adds a creamy texture to the buttercream frosting.

You can also color the icing using liquid or gel food coloring if desired.

Marshmallow vanilla frosting has a hint of marshmallow and vanilla flavors.

Marshmallow vanilla frosting is made using marshmallow fluff and vanilla extract, which is infused into a buttercream base icing.

Marshmallow vanilla frosting can be piped onto chocolate cake or vanilla cake.

Lemon buttercream is a citrusy frosting with a burst of lemon flavor.

Lemon buttercream is made by adding lemon extract and freshly grated lemon zest to infuse into buttercream icing.

Lemon buttercream is goes well on top of lemon cake or vanilla cake.

Slowly add the powdered sugar into the frosting, and taste test for yourself. Only add as much sugar as you need to. It might be too sweet otherwise.

Amaretto icing can be piped onto vanilla cake for a sweet cherry cake flavor.

Raspberry buttercream is a fruity, sweet flavored frosting for cakes.

Raspberry buttercream is made by creaming together butter and shortening with powdered sugar.

The flavor of the buttercream comes from the concentrated flavor of raspberry jam, and vanilla extract.

Hot water is used to thin out the icing as needed, depending on how thick you want the icing for your cake.

Banana buttercream frosting has a creamy banana flavor to it.

Banana buttercream icing is made with banana extract to buttercream frosting. You can add a little yellow liquid food coloring as well for a pop of color.

Banana buttercream icing can be piped onto banana cake or vanilla cake.

Coconut frosting has a woody-fruity flavor to it.

Cream cheese lime frosting is made by adding fresh lime juice to a vanilla cream cheese base frosting.

You can add a couple of drops of green food coloring if desired.

Cream cheese lime frosting can be paired with vanilla cake.

Cinnamon buttercream is made by creaming together shortening, butter, and powdered sugar.

Heavy cream is used to thin out the icing.

Vanilla extract and cinnamon are added to the frosting at the end, so you can taste test and make sure the flavor is just right before icing your cake.

Mocha icing has a coffee-chocolate flavor to it. It’s rich and decadent.

Mocha icing can be piped on top of chocolate or vanilla cake.

Dulche de leche frosting has a hint of caramel flavor.

Whipped cream is folded into the butter mixture, making a creamy frosting for cakes.

Irish Cream frosting has a creamy vanilla flavor to it with a hint of whiskey.

How to Decorate Macarons with Gold Dust

Recipes with Hollandaise Sauce and Pasta