Chicken pesto quesadillas are filled with dried cranberries and served with a side of tangy cilantro lime sauce.

The chicken is coated with a southwest rub, and cooked until it’s juicy for your quesadilla.

It’s best to make fresh pesto for your quesadilla, instead of using store bought pesto.

Homemade pesto has much for flavor and earthy notes. Store bought tends to be more bland and very oily.

Cilantro lime sauce has a light, refreshing citrus taste to it which goes well with chicken pesto quesadillas. 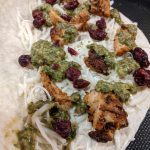