What is cinnamon roll icing made of

Do cinnamon rolls with cream cheese frosting need to be refrigerated

The fridge will slow down the aging process of the cinnamon rolls as well, making them stay good for longer than if they remained at room temperature. 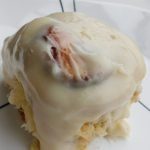 I’m a baker, cook, gardener, jeweler, and love to do anything craft related. I’ve been an avid cook since taking foods in high school. I started my love of baking helping my grandma bake shortbread and muffins. I make all of my food creations in my home in Chilliwack, BC, Canada. When I’m not in the kitchen I’m travelling, on a trail walk, or curled up with a vanilla latte and a good book.

What to Eat with Hot Chocolate for Breakfast