Raspberry jam is infused into the buttercream filling for macarons because is has a concentrated flavor.

Using only raspberries to infuse into buttercream will not give you as much of a flavorful macaron filling. You would also have the seeds in the buttercream which is not desirable.

Raspberry buttercream macaron filling is a softer icing, therefore it needs to piped carefully so it doesn’t run down the sides of the macaron.

Can you change the color of raspberry macaron filling

If you’re wanting more of a red color, you can further color the raspberry macaron filling by adding liquid food coloring or gel food coloring to make the filling more vibrant.

How to store raspberry macarons

Store raspberry macarons that have been filled in the fridge in an airtight container for up to 3 days.

Store raspberry buttercream macarons in the freezer for up to 1 month.

How to decorate raspberry buttercream macarons

Raspberry macarons can be decorated many different ways including:

How to color macaron shells red or pink for raspberry macarons

Mix the egg whites with the food coloring until you have a uniform color. Continue making your almond batter for your macarons.

You’ll want the color to be darker initially, because it will need to stretch the color with the meringue. 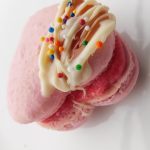 I’m a baker, cook, gardener, jeweler, and love to do anything craft related. I’ve been an avid cook since taking foods in high school. I started my love of baking helping my grandma bake shortbread and muffins. I make all of my food creations in my home in Chilliwack, BC, Canada. When I’m not in the kitchen I’m travelling, on a trail walk, or curled up with a vanilla latte and a good book.

What to Eat with Hot Chocolate for Breakfast

Layered Desserts in a Glass