Almond raspberry macarons use almond extract to give them a bit of a stronger almond flavor in the shells.

Almond raspberry macarons are decadent, melt in your mouth, and have a flavor burst of raspberry in the center.

Learn how to sift your almond flour faster by using a colander instead of a sifter to make macarons. 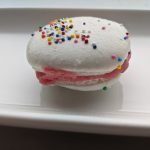