Vanilla raspberry macarons have a pungent, pop of sharp flavor.

Vanilla raspberry macarons have a deep red center giving them an eye catching look to them.

We added a few clear sprinkles to the top of our macarons to give it an extra shimmer.

Learn how to sift your almond flour faster by using a colander instead of a sifter to make macarons. 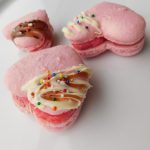 Only use egg whites from a carton. Do not separate eggs for your egg whites. Beat your meringue until you can turn the bowl upside down and it won’t move.