Our Raspberry eclair recipe is filled with a burst raspberry and chocolate.

Raspberry eclairs are filled with raspberry mousse, and topped with chocolate ganache glaze.

If you make the raspberry mousse and chocolate éclair glaze the night before, this will give them time to chill and be ready for assembly the following day.

The eclair dough should be made fresh the day you are serving them. Bake the eclairs, and when they are fully cooled, fill them and top them with glaze.

Serve your eclairs immediately after filling. This will prevent the eclairs from getting soggy. The longer the filling sits in the éclair, the softer the éclair will be.

Store any extra eclairs in the fridge overnight.

How do you know when eclairs are finished baking

Eclairs are finished baking when the top of them are golden brown. You don’t want the eclairs to be too dark, or they will be overbaked.

How to make Choux Swans 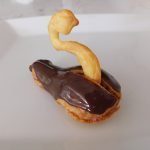 How to assemble the eclairs

10:19 am 10 Nov 2022
We use cookies to ensure that we give you the best experience on our website. If you continue to use this site we will assume that you are happy with it.OkPrivacy policy